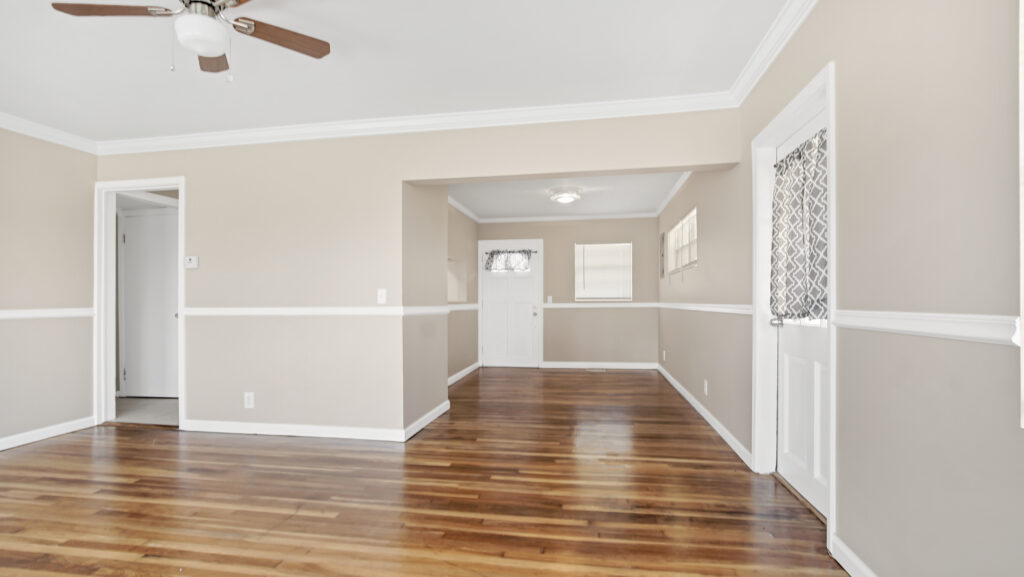 This deal is like The Little Engine That Could because I offered, got countered, and then got rejected. Then I offered again and got rejected again. And after a full 8 months, I finally offered again – and this time it was accepted!

I have found that in real estate investing persistence is key. It is a numbers game. You have to offer to get deals and by offering on deals you will inevitably get rejected. It’s part of the game so you have to be ready to deal with that rejection and also respond to it.
I liked this property because it has options. It is in a good neighborhood, the major systems are up to date, and after our rehab it’s more functional and equipped to rent as a duplex. Caveat: It’s actually a large (3,000 sqft) single family house but at some point the last owner finished the downstairs complete with bedrooms, a kitchen, and a full bath. What’s odd is it was originally the basement and houses in Florida close to the cost generally do not have basements. Nonetheless, the owner added the second unit for family and now we are turning it into an extra rentable unit to increase our cash flow and our return.

When I say our, I mean my partner and me. This is the first rental I took on a partner with. I planned on using hard money to BRRRR this property, but when I was in negotiations on it I brought it up to my mastermind group and a guy in the group mentioned he would be interested in doing the deal together. This is a guy I know, like, and trust and his goals are similar to mine so I thought it would be a good idea to partner on the deal together. Plus, it’s a deal with plenty of spread so we could both make out nicely. We discussed up front that he would bring the capital for the deal and I would manage the rehab, get the financing, and manage the property once it’s complete.

As background, when I first offered on the property in September of 2019, after negotiations I was at $125k and the seller was sticking to $135k. I thought that that $10k difference would bring the deal to a point where it wasn’t worth doing for me. But from their asking price at $165k I was pretty sure they wouldn’t get a full priced offer because the numbers just didn’t work out due to it being a hurricane damaged home, sitting vacant since the end of 2018, and having a huge foot print to rehab. On top of that, it’s just weird to an outside buyer. As a residential home, most potential buyers of this property are going to be homeowners and because it’s not a true duplex it didn’t get attention from investors. It’s uniquely situated where homeowners don’t quite like it and most investors don’t quite like it. I call that opportunity! Or I am the stupid one that bought a problem…

Up to this point though I’ve made my money where most others don’t play. It’s become my niche to find single-family homes with an extra rentable unit so that I can maximize the income and return on investment. It’s a property type that almost everyone overlooks because its not preached about mainstream on the big platforms. And that’s fine with me for now, but I would love to get more people to realize this strategy because good properties could be right under their noses – they just don’t know what to look for. When I bought my first property, I was 22, somewhere in Italy, and put an offer on a property because I saw it had a second kitchen separate from the main living space. Little did I know this extra unit would pay mine and Nicole’s entire mortgage, taxes, insurance, utilities, electric, and still net about $100/month on an annual basis by renting it on Airbnb. I found a way to legitimately live for free! All the way free because we have no living expenses; the Airbnb income covered all of it. This is even better than house-hacking a duplex where the rent for the other unit covers your mortgage. You can do this and make money too by recognizing what others miss!

Back to the duplex. The original asking price was when listed in August of 2019 was $165 (roughly). They turned away my $125k offer in September of 2019. I kept it on my radar and periodically checked if it had sold. All fall, winter, and spring it was sitting on the market like a headstone over a grave. The listing agent incrementally adjusted the price down, getting to $147k by the time I revisited it. I reached back out to see what the status was and if they were ready to sell the place at around my original offer before negotiations of $108k because that was the price felt comfortable with due to the rehab. After the property fell out of contract again, the agent said the seller was ready to get rid of it so make an offer. At this point the seller wanted cash because they were sick of the banks not lending on it. So that’s what we provided: A strong cash offer with a 10-day due diligence period and a 14-day close.

We quickly got the property inspected, got a bid from my contractor, and ran our numbers with all of that and we knew we would be good at the $110k price so we closed within those 14 days.

The rehab went smooth on this property. The setbacks were minor and it’s within 6% of our original budget, which consisted of a plumbing leak and extra water damage from the hurricane set us back a little, but that’s why I always budget rehabs to go over (Maybe one day I’ll rehab a home not damaged by a CAT 5 hurricane and come in on budget). The only notable thing from the rehab is that it got pushed back because I used the same contractor for two rehabs at the same time, so they split work in between the two properties. It’s a good thing the two are only about 5 minutes away from each other or I might have ended up even worse off. With that said, the rehab is high quality and the contractor did really good work, so we have a good-looking property now.

Now we have a property that we bought for $110k, put $35k into the rehab, and have another $10k of closing, holding costs, and miscellaneous costs. We are all in for around $155k and the appraisal came in at $205k. After refinancing at 80% LTV we will have an an additional $5-6k cash out of the deal after all closing costs are paid for. Once all said and done, we have a rented property that cash flows about $300/door/month and have no money left in the deal on top of $5-6k cash pulled out on top of that.