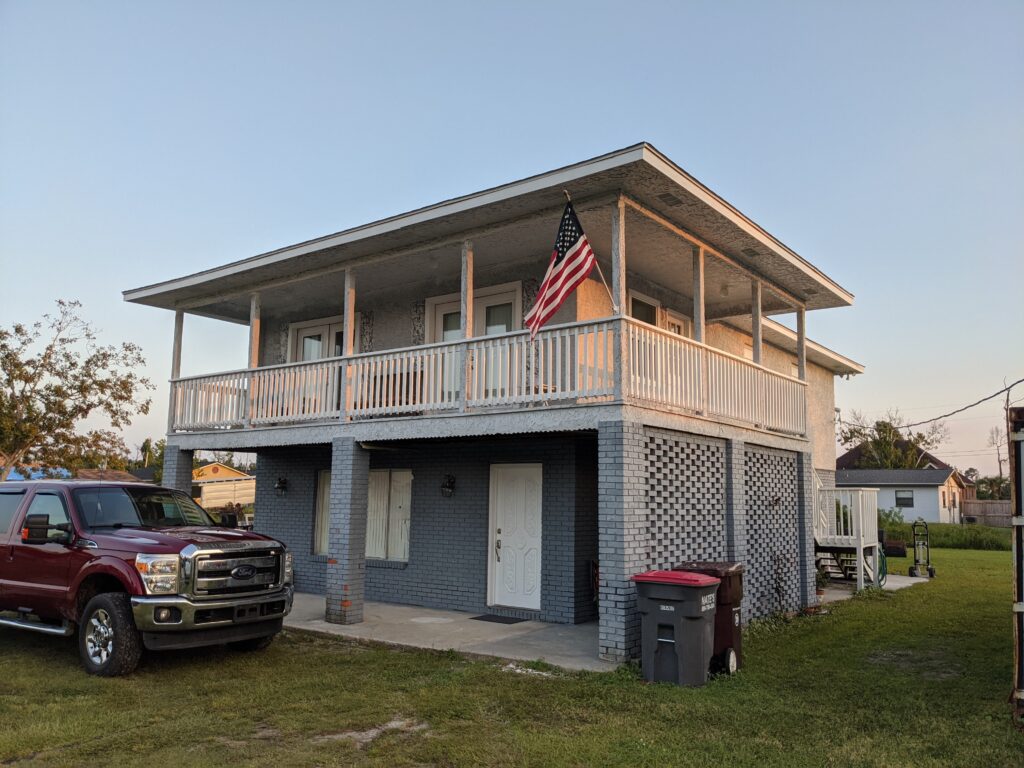 As far as belated birthday gifts go, this was a pretty good one. I actually wrote the contract with the intent to close on my birthday (November 5th) but it got pushed back a day because the seller physically signed the title documents from a distance and had to mail them in. However, we were no worse for the wear and we closed the next day on November 6th. This property is a 1900sqft, 2-story house that has the potential to be separated into two units along with a separately deeded parcel. We got two properties for the price of one!

I say “we” because I worked with a partner on this deal. We split the property 50/50 because I found the deal, got it under contract, and got both parcels sold while and he brought most of the money to close it. I could have probably raised the $132k needed to close this deal myself, but I worked it with the same partner that I had worked with before and we had just closed on the refinancing of another property we own together so we were looking for another deal. And he is also one of my good friends here in Panama City. So it made sense, was convenient, and I got to do another deal with a friend. Yes, I made less but in the grand scheme of things I decided that the amount I could have made above the 50/50 split was so negligible that the monetary reward would not surpass the strengthening of our relationship and partnership by doing this deal together.

Don’t let greed get in the way of building relationships – especially if you are just starting out AND making money! In the beginning, the important thing is that you do deals and learn from them. The beginning stages of your investing journey are all trial runs, and if you profit from them from start then even better!

What is cool about this deal is that I put another theory into practice and added a tool to my tool belt, if you will, by wholetailing it. It was sort of a mix between a wholetail and a wholesale because we listed and sold the land and then sold the house off-market. In both instances, however, we used an agent to bring the buyer.

The distinction lies in the fact that with a wholetail you actually close on the property and then list it. It is similar to wholesaling in that you buy and sell the property in as-is condition and limit your risk by avoiding rehabs, but usually with higher margins because the property is in good enough condition to list on the MLS.

But if there was meat on the bone, why did we decide to sell it rather than rehab it ourselves?

The answer to this question has several parts to it and is where you might be able to gain some good insight if you enjoy strategy and thinking about the best use for properties. For starters, my partner both agreed that the timing of the potential rehab, though a solid deal, would have been an increased stressor in our lives at the time. He had been making the final push in his solar sales and installation business and focusing his efforts on that he was able to eclipse the $3M point of revenue for the year. It was a good decision on his part to focus on that. For me, I was at a point where I was getting more involved with my multifamily business and hunting bigger deals with my team who was counting on me to do my part. I have begun working on my first commercial multifamily deal that is now under contract (with a different set of partners) so it was a good decision to focus on my part as well.

We also decided that if we did the rehab converting it into a 2-unit BRRRR’nb would be the property’s highest and best use. This had been the bread and butter of my Panama City portfolio up to that point. However, I knew that would take a lot of work for me to manage a rehab, manage the design/furnishing, acquire financing, and then set up and maintain the systems for short-term rental (STR) management. It is honestly a big undertaking, but one I at least have the process outlined for and have been through several times. My partner and I decided that because he was so deep in his business and this would require a lot out of me that I would have to do on my own that the 50/50 split on ongoing revenue wouldn’t make as much sense.

The third point that played into the decision to immediately sell it revolved around my personal situation and that I would have been doing the management of the process. I am also in the middle of building out a master bathroom at my house. This is part of my master plan to turn the house to a 4/2 from a 2/1 and doing that takes money. If we rehabbed the subject property, I would have likely dipped into my cash reserves – which I don’t like because reserves are supposed to be there as just-in-case funds. If something happened at one of my properties, I could have been putting myself in a bad spot. Selling would allow me to get my initial capital back plus the return and allow me to use the money I made from the sale on completing my bathroom and then ultimately pay myself back once I refinance that property. In this scenario, I could use sales proceeds to continue to add value to other properties and then ultimately get it back after the refinance and put it towards the next purchase.

In the end, it made the most sense to sell for timing and to get a quick influx of cash into our businesses and lives. In retrospect, it could have been a good rehab, but I also think we made the right decision at the time.

We ended up listing the land on the MLS with a friend of mine who is an agent and it was under contract within a couple of days. We listed it at a slightly discounted price because we wanted it to move quickly before potential land buyers dried up. We also sold the property with the house to an end buyer by going through one of our friends who is an agent who had a buyer lined up. This came to be by mentioning the deal at one of the local meetups (networking at its finest). As far as I know, everyone was happy with the result. Both buyers got good under market deals, my partner and I got a quick, low-risk return, and both of our agent friends made a commission from their respective portion of the sale. This came from us weighing exit strategy options and going with the strategy that made the most sense based on the current market and our personal situations, something we thought long and hard about.

I write detailed summaries of all my deals in the hope that you can pull something helpful out of them. I don’t do everything perfectly but I analyze my deals and talk about the mistakes I made and what I would change in hindsight. Writing about my deals helps me to think through my actions and internalize the lessons learned from each deal. This is a journey and every step, or deal, is a lesson to learn and an opportunity to better in the future.